Hello all. It has been ages since I've been able to post something new here, so I am not even sure how many of the active members here even remember me. For those who remain from the old days - I'm back! For those of you who I have yet to meet - Hello, my name is Rusty. I hope we can all be good friends, like in an early 1980's family sitcom, but with less a less awful color palet.

Long story short - Over the passed year updates on www.AntiquityEchoes.com have been few and far-between. This was the result of there being too few hours in a day for Christina and I (for those who don't know me, Christina is my partner and the person responsible for the videos which I post) . Between the fight to save the old Greystone Psychiatric Hospital, the documenting of said fight, and the writing of two books for two different publishing houses, we simply did not have the time needed to make a proper update. That said - We are firm believers of quality over quantity, and we knew that posting a new location just to have an update would not be in the spirit of Antiquity Echoes... so we waited. However, during that span of time we did manage to get out and film regularly, and have amassed an amazing collection of content from our travels, the fruits of which will be rolling out in regular updates throughout the coming year. Kicking this off is "Withering Confinements", which follows below... 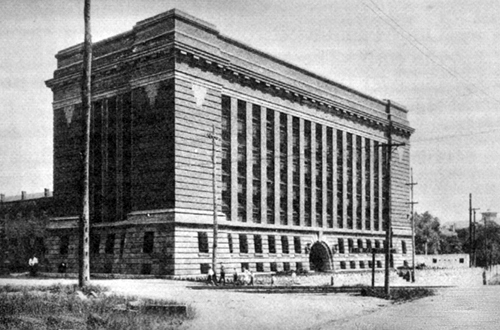 A leviathan of crimson brick stands at a crossroads in an urban Pennsylvanian neighborhood. It's an eerie sight, and one that the city surrounding it seems wholly oblivious to as they go about their daily business, never paying a sideways glance. This ignored and neglected form was at one time the county prison, but has been left without purpose since the late 1970's. Though several parties have outlined plans to rehabilitate the 100 year old structure, none have come to fruition.

Long ago the jail that stood here was actually quite beautiful, though it bares little relation to the building which greets you today. The first penitentiary on this land was built in the 1850's. At only two stories in height, it was considerably smaller than today's building, but it was also much more striking, having been modeled to look the part of a castle. Though beautifully designed, the prisoner populace eventually outgrew its walls, and forced the facility to remodel with duller form-follows-function mindset. In 1907 the castle walls fell, and in its place was built an infinitely-less impressive, but far more useful prison. The new jail shared the same foundation as the old one, but aside from some structural supports few of the interior elements remained. Almost every wall, ceiling, and floor was replaced to make way for a prisoner population of over 100.

Not all of the original castle-jail was lost though. Attached to the rear of the modernized building were the remnants of the old castle, gutted, and made into a recreational center for the inmates. Sadly we were unable to document this strange sounding sight, as it was razed long ago. Today a field of wild grass grows in a square patch of land directly behind the jail where it once stood. It is in this field that our journey begins.

We documented this location over a couple visits, at two dramatically different times of the year. Our initial expedition was paid on a warm and sunny summer's afternoon, a trip which focused primarily on photography. Our second visit occurred many months later on a grey and rainy winter day, one that slowly turned to freezing rain before our time was through. Seeing the old jail in such varied weather provided much insight into how nature slowly subdues an old building such as this. 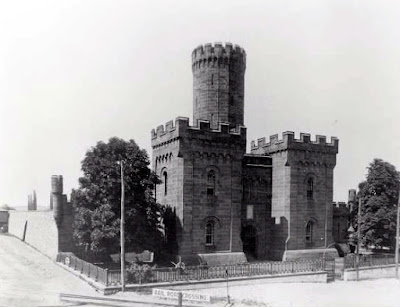 In the summer months the lawns and fields surrounding the jail do their best to cover the facade in all manner of plant-life. It is the ivy which excels here above all else. Taking advantage of the solid footing provided by the weathered brick, thick vines cover several stories along the rear of the building in large green patches. As we approached the building we began to hear a strange sound coming from within. It was repetitive, occurring every couple seconds, and sounded as if two large pieces of metal were being hit against each other. Any sounds coming from an abandoned buildings are cause for concern, and that is twice as true in a neighborhood such as this.

Our pace slowed, and we proceeded with caution. Once inside the sound was alarmingly loud, and we immediately set about finding what/who was causing it (and hoped it wasn't going to end poorly for us for doing so). Luckily our search ended quickly, and without issue. In the former kitchen a large vent remains in the wall, which once serviced a long-since removed oven. Like all such vents, this one was equipped with a one-way flap to keep wildlife and weather from coming in from outside. It just so happens that the way in which wind whips through the lower level of the old jail causes a strange pocket of air to form in the former kitchen. The pressure spikes and drops within seconds, and each time it slams the old one-way flap open and shut with considerable force. We shoved a broken mop handle in the vent and moved on.

Animal life is not uncommon here, as we walked the darkened hallways leading from the entrance, we could hear the sounds of birds and squirrels scurrying the corridors and cell blocks above our heads. The lower level of this old jail housed the offices, and on each floor above were found the prisoner's cells. Being as the lower level was the staff quarters, it was much better appointed than the simple floors above. Of particular note were the embossed tin ceilings, now rotted and hanging in a precarious fashion. In some rooms the tin had fallen completely, covering the floor and screeching loudly as you traversed it. There were still small areas where the ceilings remained entirely in place, and seeing that allowed you to imagine what the rest would have looked like back in the days of operation, or even today if it had been properly cared for.

In the winter things are far different. The jail is bitterly cold inside, and without the plant-life adorning its exterior it looks as lifeless as it feels. The lack of foliage also exposes the sizable mounds of garbage which have accumulated at the base of the building. While filming filming, a thunderstorm slowly rolled in on us, and we quickly discovered that the jail is far from resistant to the elements. Pouring rain wailed upon the flat roof of the jail, and leaks promptly became apparent in the ceiling. Before long these slow drips became steady streams, pouring their way through all five floors of the prison, eventually pooling in the basement. Stairwells became waterfalls, and floors wading pools. Curtains of water flowed downward over walls and windows, coating all in a wet undulating sheen. It was difficult to discern the outdoors from the indoors after just a few minutes.

There's no telling what lies ahead for the old penitentiary. Though it appears there is currently little interest in redeveloping the building, is also seems the city is in no great rush to be gone with it. So it sits, as it has for over thirty years now. Collectively the jail has been forgotten by the city, even as it cloaks their streets and buildings under its ever-present shadow. 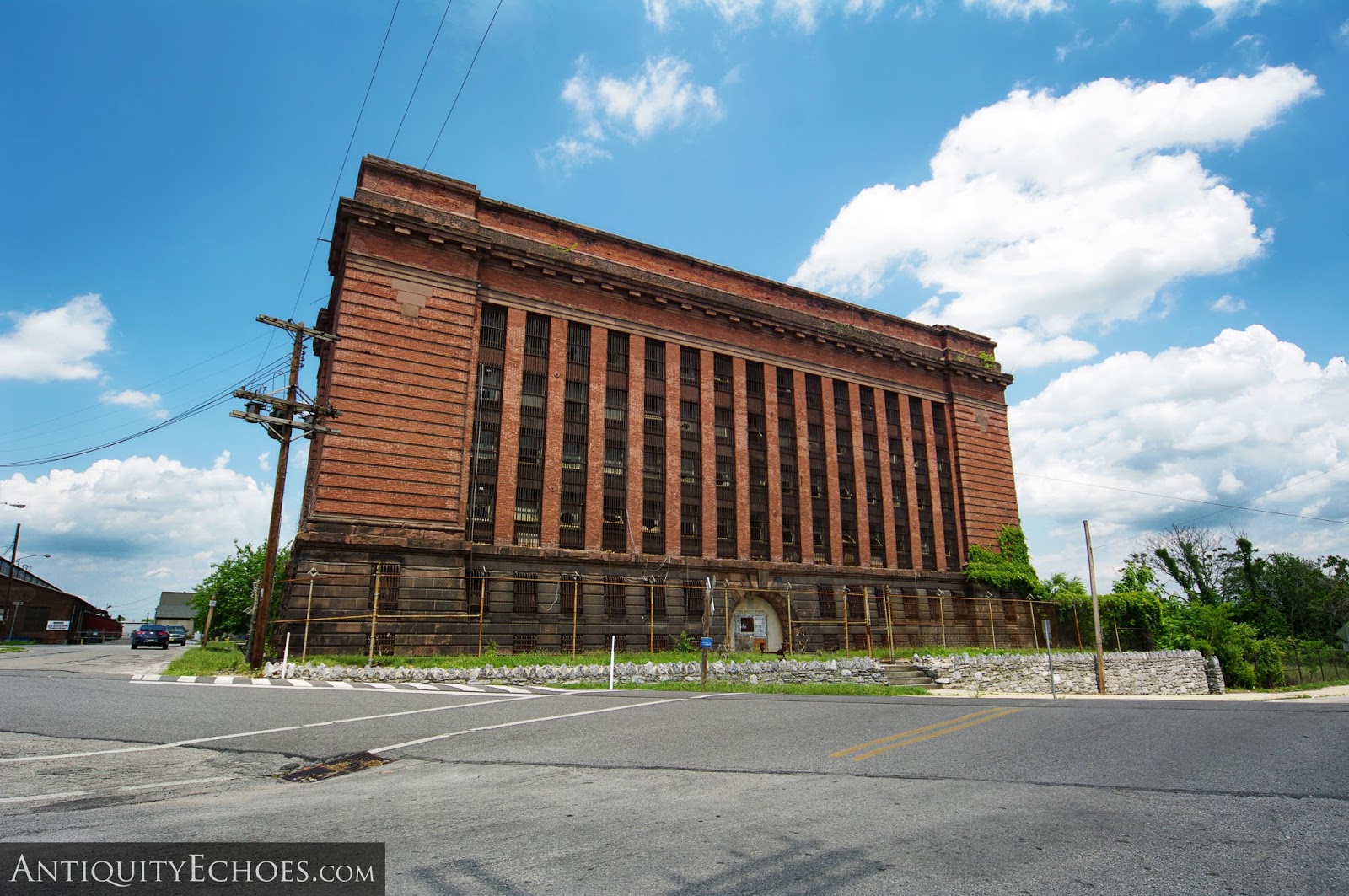